“Rely-a-Bell” burglar alarm, Tower Hamlets • Yesterday’s post showed the most common and beloved style of Rely-a-Bell, dating probably from the 1950s. This one, covered in pigeon netting, is far rarer; in fact it’s the only example of this design I’ve seen. It’s not the only logo variation to be found – there are a few others on Flickr, where I’ve made a gallery called Rely-a-Bell: History showing variations from the 1920s–1960s. According to a Flickr comment by ~Notes, “The Rely-a-Bell Company dates back to 1921 and was a market leader until 1961 when it was purchased by the Burgot company, which later became Chubb”. I’d guess this jaunty and professional-looking logo dates from the mid 1960s (assuming Burgot kept the brand name after they took over); it reminds me of the lettering on detergent packs from that era, and the circular device has something of the launderette about it too. I wonder if this was the last-ever iteration of the Rely-a-Bell livery? For more background on Rely-a-Bell, see this memoir by Dave Robertson, MD of Full Stop security (who have an excellent burglar alarm design I shall feature one day), which starts with his time at Rely-a-Bell in the early 1960s. • Spotted: Wentworth Street, Tower Hamlets, London, E1, England, 2010 • Politics: In the Labour constituency of Bethnal Green and Bow 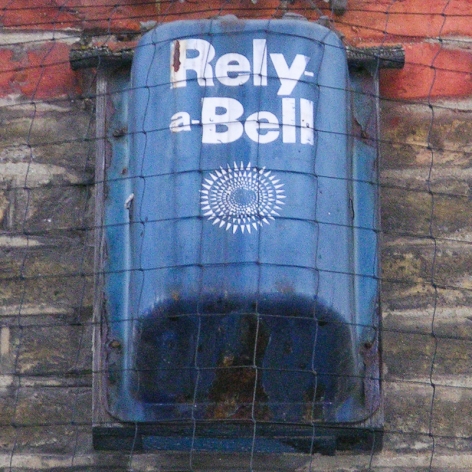