“Shorrock” burglar alarm, Camden • I’ve always been attracted by this subtly stylish pentagon with its flaring red sun, but most examples have faded to blank-faced anonymity. Originally called Shorrock Develoments, the firm was founded in 1962 by Stanley Shorrock, said by some to have invented the first UK burglar alarm (though there had been several UK alarm firms before this, so I’m not sure if that’s true). I could find virtually nothing about Stanley Shorrock on the internet, despite an obsessive search; I think he ended up a Sir, and probably started life in Blackburn, which is where he based the firm. Shorrock is an old local place name, cropping up regularly for hundreds of years around the Lancashire town, where there’s a Shorrock Lane to this day. It’s also a common surname in the area; in fact the current Labour councillor for Shadsworth, the ward where Shorrock’s factory was based, is called Jim Shorrock – coincidence? I did turn up a textile machinery designer from Blackburn called Stanley Shorrock, who in the 1950s co-developed the first British tufted carpet manufacturing machine with Brian Mercer, but I have no idea if that’s the alarm firm’s founder – the dates tie in, so it’s entirely possible. The known facts are less intriguing, being – as with all these big security firms – mainly a string of post-1980s mergers and acquisitions. Shorrock, under the mysterious but successful Stanley, expanded thoughout the 1960s to become a large and respected firm. They designed and manufactured their own security systems, building two factories in the Blackburn suburb of Shadsworth in the early 1970s; the blue metal Shorrock boxes with faded white lettering still occasionally seen perhaps date from this era. In 1985 Shorrock listed on the stock exchange, and in 1986 they were snapped up by BET PLC, a UK conglomerate once called British Electric Traction and better known for its bus operations. This must have led to the era of the fine pentagonal box shown here, its hint of the launderette harking back to the days when modernist graphics were considered suitable for everything from electronics to detergent. In fact that spiky star is a twin of the once-familiar logo of Rediffusion, a TV company owned by BET until the mid-1980s. In 1996, BET got taken over in a hostile bid by Rentokil Initial PLC, the unholy alliance of a pest-control firm and an industrial launderer (perhaps they were attracted by the washaday-style logo). At this point their alarms became branded Initial Shorrock, and by 2000 just Initial; they retained the chic pentagons, but the graphics became an undistinguished 90s affair, still much in evidence on the high street today. After several years of grumbles about under-investment and poor management, the division was bought out in 2007 by serial security-firm-gobbler UTC, a US leviathan on a roll after their 2003 aquisition of Chubb alarms. By 2010 all UTC’s security brands had been rationalised under the venerable blue triangle of Chubb Systems (perhaps that’s why I’ve recently seen an unhappy pentagonal Chubb) – and so Initial Shorrock was no more. Maybe one day I’ll find out what happened to Stanley Shorrock, too. • Spotted: Covent Garden area, Camden, London, WC2, England, 2004 • Politics: In the Labour constituency of Holborn and St Pancras 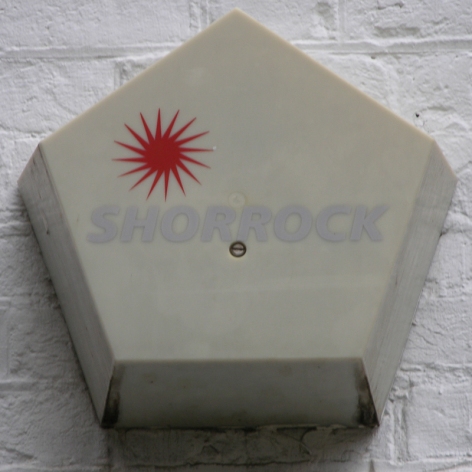