“Yale” burglar alarm, Cambridge • This Ivy League pairing of a Yale in Cambridge is the last “Modernist” alarm for now. I’d intended to write up this theme with brief musings on stylish shapes and clean design, and instead got drawn into researching the fates of a tangled web of venerable old firms which became the global trading chips of late 20th-century multinationals. And it’s not just the traditional UK brands that have suffered this fate: Yale is the US equivalent of Chubb, a storied name dating back over 150 years that’s now in the hands of an overseas corporation. The company was started in around 1840 in Newport, New York, by Linus Yale Senior, an innovative locksmith of Welsh extraction. The family firm’s future was assured by his brilliant son Linus Junior, who invented both the standard combination lock, and – inspired by a 4,000-year-old Egyptian design – the Yale cylinder lock, used to this day. I can’t find much hard fact on the internet, but based on various Wikipedia citations and Yale’s own multifarious sites, the timeline is briefly thus. Yale soon became Yale & Towne – Henry R Towne being a business partner – and expanded worldwide. Yale UK was founded in 1929 in Willenhall in the West Midlands, and in 1987 their US owner First City Industries Inc sold them off for $400m to Valor PLC, a long-established gas fire manufacturer from Birmingham (the UK Brum, despite the US spelling of Valor), becoming Yale & Valor. After various other corporate machinations, they were bought in 1991 by Williams Holdings, a 1980s conglomerate (a lumpy word for a lumpy business model) formed to snaffle up underperforming businesses; in 1997 they also snaffled up Chubb, so for a brief period the two historic names were conglomerate bedfellows. In 2000 Williams, now a trendy PLC, sold the Yale Lock Company to Finno-Swedish security giant Assa Abloy. Confusingly, Chubb’s locks division also ended up at Assa Abloy, where they’re now sold under the Union brand (another historic locksmith that got swallowed up); while Chubb’s alarms division ended up at US behemoth United Technologies Corporation, where it’s used as the umbrella brand for all the other security firms UTC has acquired. Assa Abloy still use the Yale brand, and – to return to my original idea of writing sweet nothings about design and styling – have created a rather beautiful identity. This shiny round yellow siren with its cleverly incorporated blue strobe is the best new design I’ve seen for years, its sophisticated curves suggesting a Modernist sculpture (Brancusi, perhaps). It’s a true successor to the Modern Alarms “jelly mould” which kicked off this Modernist category, and a vast improvement on the fussy faceted gem-shapes of the last decade. There’s also a wedge-shaped version of this Yale, which functions as a dummy box; it’s OK, but – like a boring chunk of Cheddar to the siren’s gleaming golden Gouda – far less attractive. Cheddar’s actually tastier than Gouda, but we’ll let that pass. • Spotted: Regent Street, Cambridge, Cambridgeshire, CB2, England, 2010 • Politics: In the Liberal Democrat constituency of South Cambridgeshire 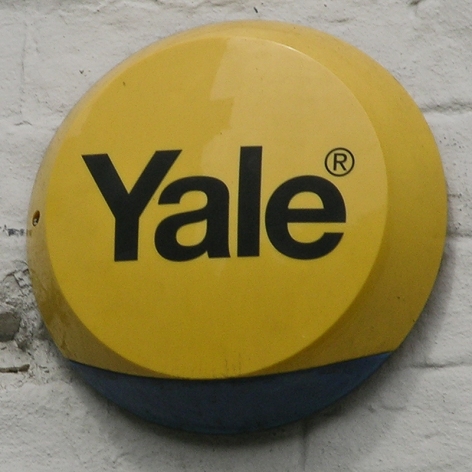