“Security Alarm Services” burglar alarm, Hereford • I’m generally not keen on jewel-shaped burglar alarms but this one, no pun intended, is a gem. And what better to sit on a sparkling gem that a thieving magpie, which despite not being identified by name, this bird indubitably is. It’s a sensitive piece of design, the attractive drawing perching cleverly atop the logo, a somewhat crime-inappropriate but charmingly foliate 1970s-style swash font. The firm’s initials spell SAS, which would seem more suited to an aggressive combat-style design; but this is from wild and woolly rural Herefordshire in the far west of England, where placid cows and perky birdies rule. In honour of its peaceable location, I should add that magpies in folklore are not considered totally bad, being believed in some parts to protect the household and predict the future. On the other hand, in Scottish superstition a magpie near the window foretells death – which makes placing a Magpie burglar alarm there a pretty bad idea. • Spotted: Town centre, Hereford, Herefordshire, HR1, England, 2008 • Politics: In the Conservative constituency of Hereford and South Herefordshire 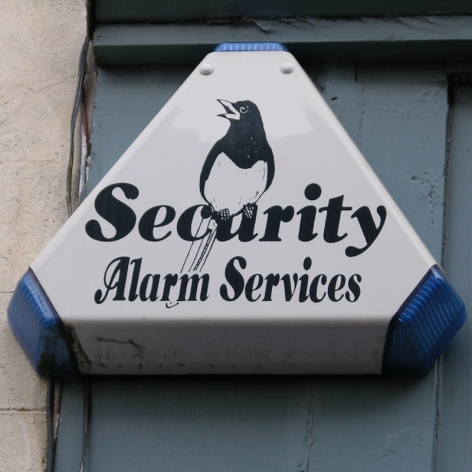