“IME” burglar alarm, Glasgow• A shop with two names and two alarms. The grey Govan Pharmacy sign, top, looks decades old and may even relate to the original use of the premises. The brash Govan Carpets sign beneath it is obviously recent, but what riches lie inside to require not one but two burglar alarms I can’t imagine. I went to check them out on Google Street View (below) but came back none the wiser, except that they used to have ADT alarms. The rest of the imposing but gritty street consists mainly of closed units, bookies, alcohol establishments and a very prominent funeral parlour. • Spotted: Govan Road, Glasgow, Lanarkshire, G51, Scotland, 2010 • Politics: In the Labour constituency of Glasgow South West 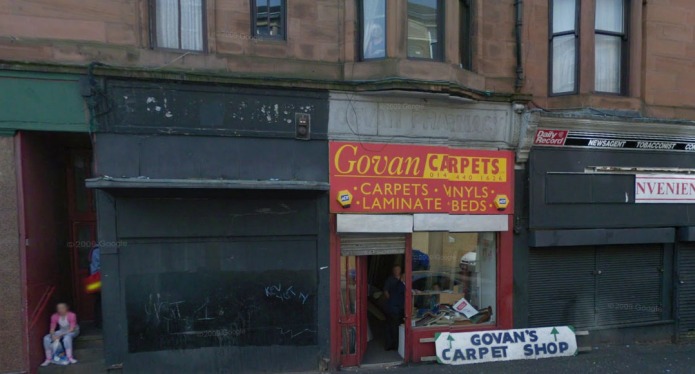 Above: the scene (shot some while back) on Google Street View – note ADT alarms and coverless bell box on the unoccupied left-hand unit