“Orion Alarms” burglar alarm, Tower Hamlets • This naive but multi-layered design recalls two mythical figures: Orion and Pac-Man. Ostensibly a monogram comprising an O and an A, it’s probably meant to represent a pyramid in a circular night sky with a crescent moon overhead. Apart from the night sky, it’s hard to see how this connects with the Greek hero Orion, a giant hunter blinded for raping a princess, healed by the sun, then killed by a scorpion and turned into a constellation by Zeus. There are few reliable descriptions of Orion, but we know he wasn’t a big black blob. However, the design also looks disturbingly like a Pac-Man with a winking eye, chomping his way down the alarm. Developed in Japan in 1979 and originally called Pakkuman, it’s fair to say that the genre-launching yellow-and-black ghost-munching video game has achieved legendary status. The name is based on paku-paku, Japanese slang for lip-smacking eating (equivalent to “nom-nom-nom”), and the fact that the avatar looks like a part-eaten pizza is no coincidence, because according to its inventor Tōru Iwatani, that’s what it’s based on. This is the second Pac-Man-like alarm I’ve featured: the first was JB-Eye, and no doubt the game was a formative entertainment for both designers. • Spotted: Fairfield Road, Tower Hamlets, London, E3, England, 2010 • Politics: In the Labour constituency of Bethnal Green and Bow 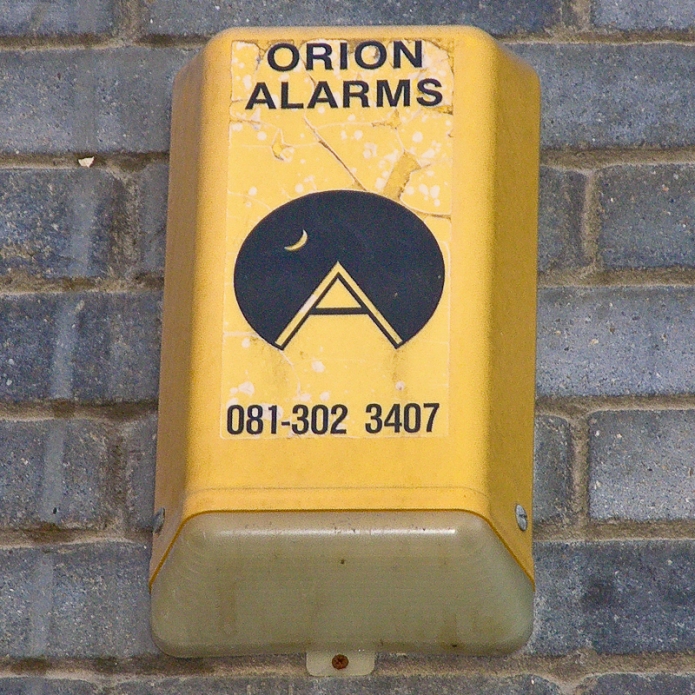