"Orion" burglar alarm, York • Ah, the multi-faceted Orion, a hunter in Greek mythology who has lent his name to a region of the night sky, the Lunar Module used in the Apollo 16 mission, NASA's Space Shuttle replacement, a brace of space stations, and vast amounts of other scientific and astronomical things too. Not to mention a burglar alarm. • Spotted: Low Petergate, York, Yorkshire, YO1, England, 2011 • Politics: In the Labour constituency of York Central
Orion, York: multi-faceted 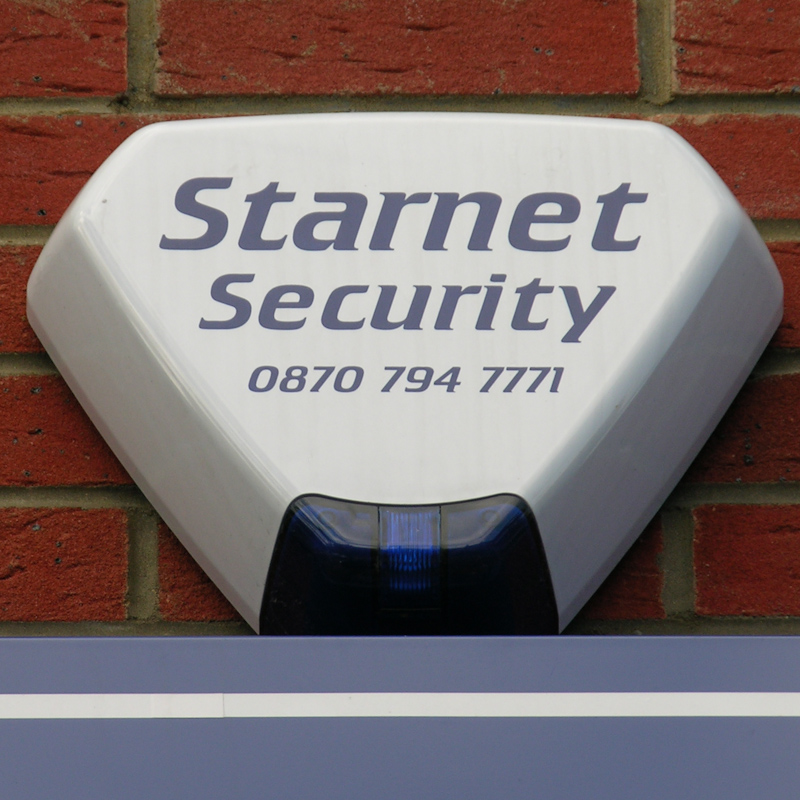 "3 Star Alarms" burglar alarm, City of Westminster • My brother had a tank top with a design like this on it in the 1970s (he was very young, I hasten to add). • Spotted: Eastcastle Street, City of Westminster, London, W1, England, 2012 • Politics: In the Conservative constituency of Cities of London and Westminster

"Albany Alarms" burglar alarm, Camden • A tentative inclusion in the astronomy theme, but it does have a sort of star in the middle, though I daresay it's intended more as a compass rose. • Spotted: Covent Garden area, Camden, London, WC2, England, 2004 • Politics: In the Labour constituency of Holborn and St Pancras
Albany Alarms, Camden: compass rose 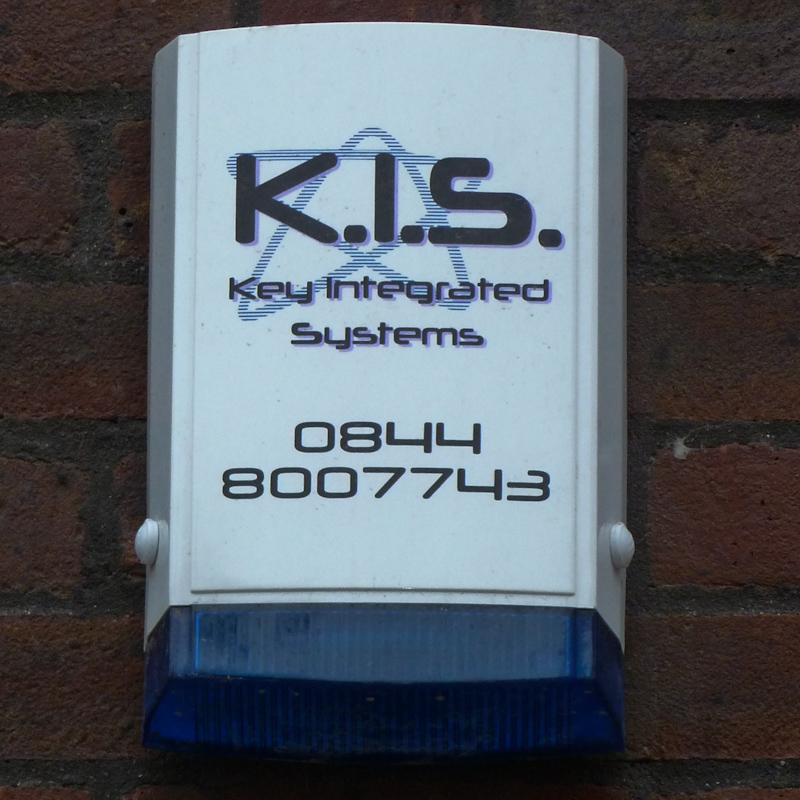 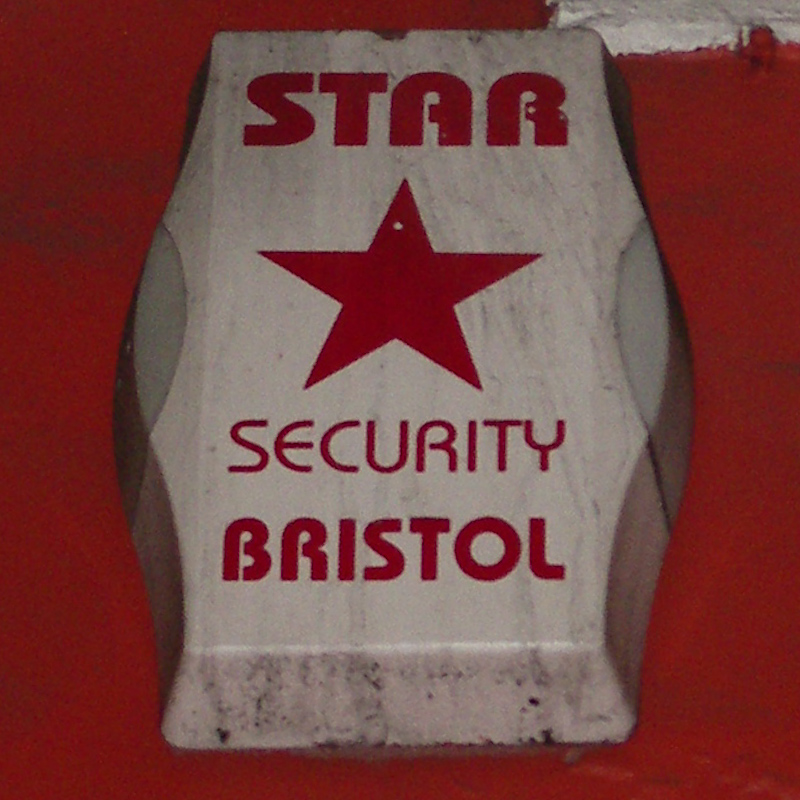 "Padley Security" burglar alarm, Brighton • This is a bit odd, as the name seems to have nothing to do with the sun. Maybe the image is meant to be a blaring bell, or a flashing light. Or maybe it's just a celebration of the sunniness of Brighton. • Spotted: Queens Road, Brighton, East Sussex, BN1, England, 2010 • Politics: In the Conservative constituency of Brighton Kemptown
Padley, Brighton: blaring 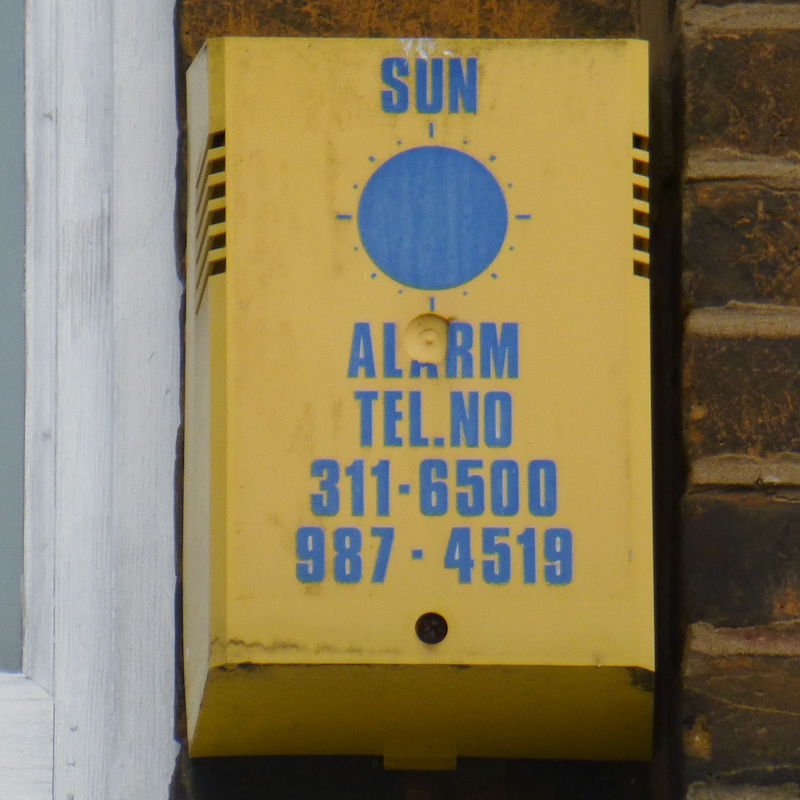 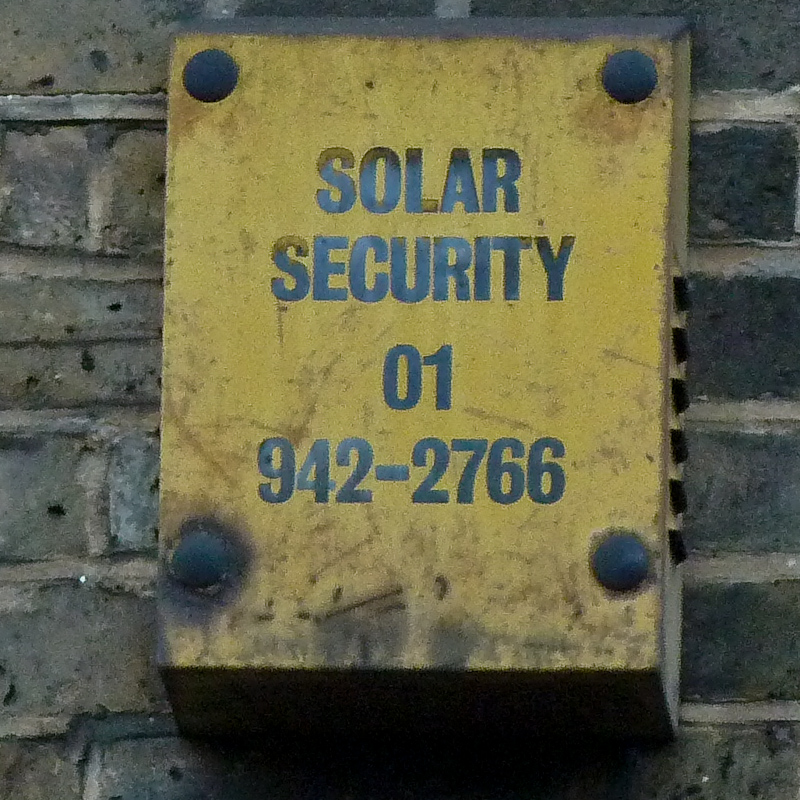 Ghost under "3 Star Alarms" burglar alarm, City of Westminster • This anonymous delta ghost could have been anything, so I won't even hazard a guess as to its brand. But 3 Star's logo also conjures up distant days: in the 1970s, my brother had a tank top with exactly the same design on. • Spotted: Eastcastle Street, City of Westminster, London, W1, England, 2012 • Politics: In the Conservative constituency of Cities of London and Westminster
Ghost under “3 Star Alarms”, Westminster: tank top

"New Century Security" burglar alarm, Bristol • This is a double whammy: a shield-within-shield logo. And not just that, but a gauntlet clutching a lightning bolt, a rampant lion, a window at night (I think), a repetition of their name, and what looks like the European stars. There's even another version with "21st" above the title, just in case you thought the new century was the 18th. Talk about covering all the bases. • Spotted: Surrey Street, Bristol, Avon, BS2, England, 2011 • Politics: In the Liberal Democrat constituency of Bristol West 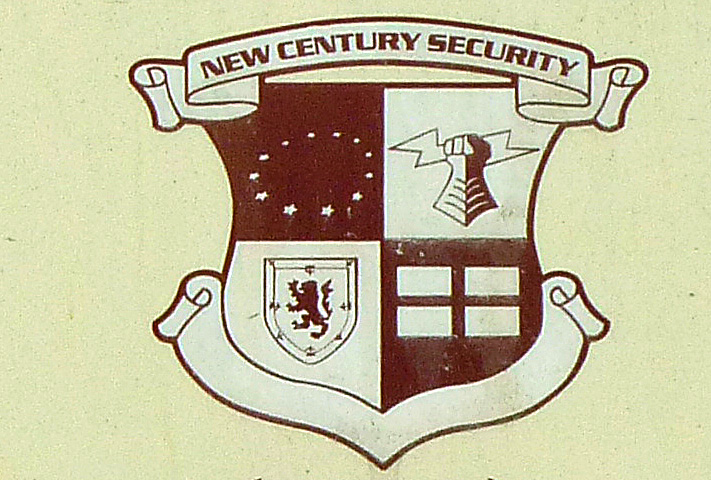 "Key Integrated Systems" burglar alarm, Bristol • We're moving into uncommon rectangular shapes now, which basically means boxes with fancy edges or indentations – so although rare, they're not the most exciting of enclosures. This has a ridged clear panel beneath a curved white top, and is the only example I've ever seen. It's not very recognisable however, and the best I can say about it is that it's a bit like a soap dish, or perhaps a sea slug. I can't argue with the disco-tastic logo though, which manages to incorporate an acronym, a star, locksmithery, technology, and the fact that K.I.S. were established in 1976. How on earth does Bristol support so many independent security firms? It suggests it's the crime hot-spot of the western world, though I'm sure it's not. • Spotted: Queen Charlotte Street, Bristol, Avon, BS1, England, 2012 • Politics: In the Liberal Democrat constituency of Bristol West
“Key Integrated Systems”, Bristol: soap dish