“Stocks Security” burglar alarm, Leeds • Now to revisit the law and order theme, starting with pantomime burglars. This one is just completely brilliant! And look, below, there’s four of the […]
Stocks Security, Leeds, 2014

"Banham" burglar alarm, Lambeth • This is brilliant – a posh Banham alarm in the most rough-and-ready bespoke niche. I found it on the wall of Pimlico Plumbers, who despite their toney SW1 name are located in the distinctly less upmarket area of Kennington, on the other side of the River Thames. • Spotted: Sail Street, Lambeth, London, SE11, England, 2011 • Politics: In the Labour constituency of Vauxhall 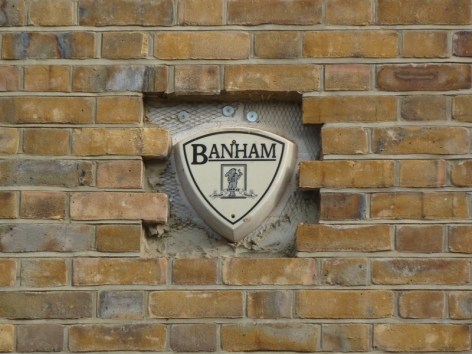 “Wilton”, Salisbury: half man, half wasp

"Wilton Alarm Services" burglar alarm, Salisbury • Possibly inspired by Jeff Goldblum in The Fly, what we have here is a creature half human, half insect, and all bonkers. Its nether regions are waspish, with a striped thorax resembling a pantomime burglar's t-shirt, while its back sports just one weird bubble-shaped wing. Atop this sprout the head and arms of a pudgy middle-aged man, bald save for a huge, lop-sided sprig of hair. One arm clutches an object (maybe a burglar alarm) saying "WASP" to his breast, while the other brandishes a fencing foil, presumably denoting the sting of justice. Grinning manically, he hovers like a drunken fancy dress uncle above the firm's logo – whose initials inexplicably spell WAS, not WASP, and are printed in blue and white rather than the more logical black and yellow. What a mutant fencing wasp has to do with burglar-catching is anyone's guess: I like to think the character was designed by the security firm's owner, in the colours of his favourite football team, and portrays himself. One of the craziest burglar alarm designs I have found. • Spotted: Town centre, Salisbury, Wiltshire, SP1, England, 2007 • Politics: In the Conservative constituency of Devizes

“Wilton”, Salisbury: half man, half wasp

"TR Security Alarms" burglar alarm, Tower Hamlets • This isn't a cartoon, it's a psychodrama. It's so troubling it reminds me of a Grimm's fairy tale, or one of those scary 1960s eastern european animations so brilliantly pastiched in The Simpsons as jerky cut-price replacements for Itchy and Scratchy. Let me describe the scene. The sun is high; the shadows small. A stocky, bizarrely-dressed man with the bulbous nose of a heavy drinker sprints across a featureless wasteland. In his white-gloved, malformed hands he cradles an intricate jewelled crown, the sort normally kept in a monarch's treasury. Peering over his shoulder, masked eyes glinting, he grins triumphantly back at the victim of his crown theft: a neat suburban house. A house that is half human. A house that is sobbing. Its sides heave with emotion, its door gapes in horror, its upstairs windows have become scrunched-up eyes squeezing out huge tears. By its side sits a writhing tangle of shadows, so dark it's impossible to work out what lies within. Maybe it's the house's existential despair; maybe it's the burglar's black soul; maybe it's just a bad drawing of a bush. But the moral is clear: don't store a crown in a suburban house, and if you must, then don't leave the front door open when there's a weird-looking bloke hanging round. • Spotted: Commercial Street, Tower Hamlets, London, E1, England, 2010 • Politics: In the Labour constituency of Bethnal Green and Bow

"Tops Security Solutions" burglar alarm, Aylesbury • Peer closely at this and you'll see a frowning, potato-faced fellow in an eye mask and stripey t-shirt positively pelting along beneath the logo. His defining features are a swag bag as big as he is, and a towering top hat. While it may be unusual to turn to burglar alarms for searing indictments of modern capitalism, it's hard not to see this badly-drawn chancer as a booty-laden banker or toffish politician, fleeing with the hard-earned savings of ordinary folk – a kind of reverse Robin Hood. Adding a further heady whiff of class war to this box are the police-blue colourway, the Tory constituency, and the bits of rubbish stuffed behind it. As for why the cartoon is buried under the logo, my theory is that a relative of Tops' boss did the useless cartoon, and the graphic designer hated it so much they tried to hide it. • Spotted: Kingsbury, Aylesbury, Buckinghamshire, HP20, England, 2010 • Politics: In the Conservative constituency of Aylesbury 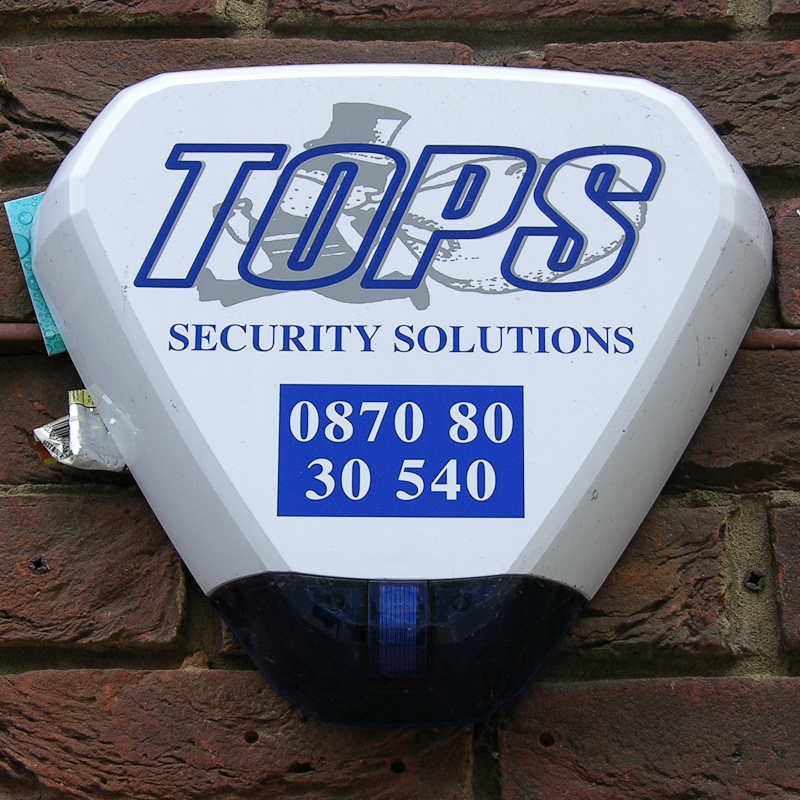 "X Ray Alarms" burglar alarm, Hersham, 2002 • An unusual shape which combines several top burglar alarm tropes in one naive logo: shield, lightning bolt, dated technology, and a poorly-drawn running figure, sporting swag bag, unidentifiable stick, and what is presumably meant to be an eye mask (did burglars EVER wear those?) but looks more like a motorcycle helmet. Or maybe the burglar’s meant to be an alien. Or an evil radiologist. Hersham also spawned Sham 69 and Shakin’ Stevens, so it doesn’t seem impossible. • Spotted: Ambleside Avenue, Hersham, Surrey, KT12, England, 2002 • Politics: In the Conservative constituency of Esher and Walton

“Banham”, Kensington: the ponciest burglar of all

“Banham” burglar alarm, Kensington and Chelsea, 2010 • Unlike the shadowy intruder device, which is simply a generic silhouetted figure, pantomime burglars come in many forms. This refugee from Dexy’s Midnight Runners, on the venerable Banham shield, is by far the most poncey. Who does he think he is, posing in his fancy frame – a gondolier, a mime artiste, a strolling player, a jolly onion seller? He’s even dressed in golden cloth, playing on the beribboned motto “Another Burglar Foiled”. Banham knows it has a reputation as the posho’s burglar alarm, ubiquitous in London’s more gilded postcodes, but this is pushing it. He’s a burglar, goddamit, not a member of the Royal Academy. Interestingly (to some), this New Romantic-looking livery is a fairly recent Banham strategy; previously their alarms were of the minimalist typographic persuasion. From functionalism to frippery: it must be the way society’s going • Spotted: Cheval Place, Kensington and Chelsea, London, SW7, England, 2010 • Politics: In the Conservative constituency of Kensington

“Banham”, Kensington: the ponciest burglar of all

Nameless burglar alarm, Stoke-on-Trent, 2010 • Felons on burglar alarms seem to come in two types only: the shadowy intruder, and the pantomime burglar. This is a prime example of the latter: stripey t-shirt, black eye mask (here resembling antique goggles), and a big lumpy bag marked swag. A striking work outfit, certainly, but a bit of a giveaway. For good measure, this chap’s wearing some manner of proletarian cap – or maybe it’s a knotted hanky – and has got mightily entangled in a “no entry” sign. No wonder he looks so unhappy. Unlike the artist, who considered this design so iconic that the company name has been omitted. Unless that’s the burglar’s phone number it’s advertising. • Spotted: Hanley town centre, Stoke-On-Trent, Staffordshire, ST1, England • Politics: In the Labour constituency of Stoke-on-Trent Central 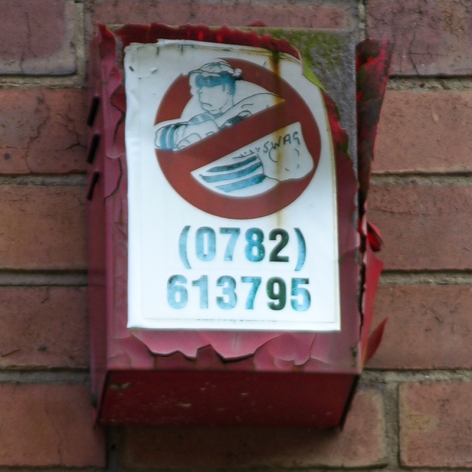