Nameless burglar alarm on The Manor Cafe, Southwark • The alarm here , carefully placed above the street number, doesn't even have a name. But what a beautiful bit of decay! And a fine illustration of my contention, yesterday, that roads called "Manor" – here, Manor Place, in the lost triangle between Kennington, Camberwell and Walworth – are usually the opposite of their upmarket names. This entire row of shops later got boarded up with lurid purple hoardings, which are still visible on Google Street View; all that remained uncovered were a bookie, an off license, and the Sound Wickford alarm, far left. • Spotted: Manor Place, Southwark, London SE17, England, 2001 • Politics: In the Liberal Democrat constituency of Bermondsey and Old Southwark 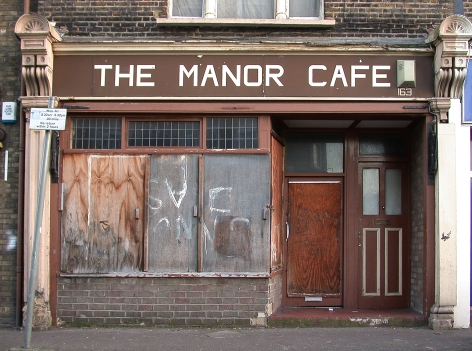 "Blitz Security Alarms" burglar alarm, Old Coulsdon • OK, so it's blurred, but I'd only just got my first digital camera (high-end at the time, £700 for three megapixels – how times change). I was actually photographing a parade of ridiculous half-timbered Tudorbethan convenience stores in deepest Surrey (see below), when I noticed the name on a tiny box located above a fascia. Blitz: a term powerfully associated in the British psyche with a brutal Nazi invasion attempt, and the "Blitz spirit" that survived it. The cod-medieval shops and cod-wartime security device seemed to meld into a parody of the traditional values supposedly espoused in this cosy and affluent Conservative heartland, but it still seemed a weird word to put on a burglar alarm. Intrigued, I started looking out for more wartime burglar alarm names, and soon discovered a Churchill and a Spitfire. They too were in Tory areas, so I started noting the political constituencies of all the alarms I photographed, to see if there was any correlation between subject matter and voting patterns – a project still in process. And thus an obsession was born. • Spotted: Coulsdon Road, Old Coulsdon, Surrey, CR5, England, 2001 • Politics: In the Conservative constituency of Croydon South 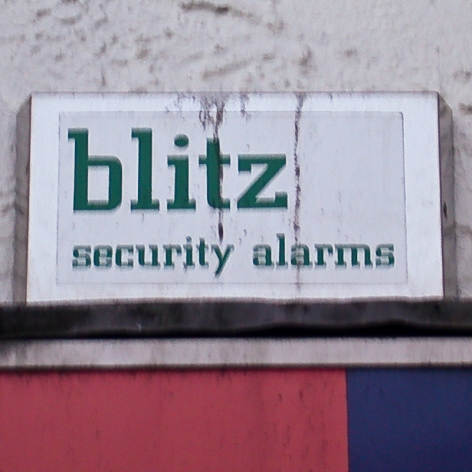